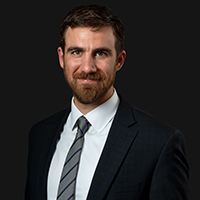 We are pleased to announce that Samuel B. Dinning has joined the firm’s litigation group.

Sam most recently worked as a deputy prosecuting attorney in King County, Wash.  He took more than 20 cases to trial, had multiple cases before the courts of appeals, and argued before the Washington Supreme Court, supporting rehabilitation as a critical function of the juvenile justice system. Sam was also a leader in efforts to develop office policies that support the more equitable exercise of prosecutorial discretion.

Prior to working as a prosecutor, Sam attended Harvard Law School, where he served as Executive Director for Harvard Defenders and on the Board of Directors for the Harvard Legal Aid Bureau.  Following law school, Sam worked in voter protection ahead of the 2016 presidential election.

Sam joins an experienced litigation group that represents individuals, business corporations, and governmental entities, including state agencies, municipalities, and airports across the country.