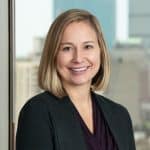 Melissa Allison is honored to receive the American Cancer Society Cancer Action Network’s Judicial Advocacy Initiative (“JAI”) award in Washington D.C. this week. ACS CAN, through the JAI, recruits lawyers to bring the fight against cancer to the courts, frequently pursuing cases that affect access to healthcare and tobacco control.  The JAI award recognizes lawyers who donate their services to this critical work.

Melissa, along with A&K attorneys Scott P. Lewis and Christina S. Marshall, represent ACS CAN and other allied public health organizations who are working with the Department of Justice to require cigarette manufacturers to display certain court-ordered “corrective statements” at retail points-of-sale throughout the country.  The corrective statements were ordered as part of the landmark legal decision in the federal government’s Racketeer Influenced and Corrupt Organizations Act (RICO) case against the tobacco industry, and are meant to prevent and restrain the manufacturers from continuing to deceive the public about the adverse health effects of cigarettes in violation of the RICO statute.  Melissa is grateful for the opportunity to do this important work alongside the public health community.