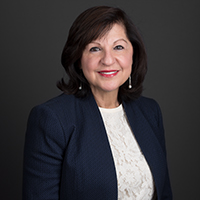 The Lelia J. Robinson Award honors women attorneys who have captured the spirit of Lelia J. Robinson, the first woman admitted to practice in Massachusetts. The award recognizes women who, like Robinson, are pioneers in the legal profession and have made a difference in the community. This year the WBA is proud to recognize two women who are experts in their fields and an inspiration to us all: Deborah Harris and Carmen Ortiz. Both women will be honored at the WBA’s Annual Gala on October 10, 2019 at the Sheraton Boston. The Gala is the WBA’s largest event of the year and is attended by several hundred attorneys, judges, legislators, and business professionals.

“It is our pleasure to recognize Deborah Harris and Carmen Ortiz with our Lelia J. Robinson Award at our 2019 WBA Gala,” said WBA President Jennifer Saubermann. “They are amazing role models who demonstrate the importance of legal work and commitment to community.  Carmen Ortiz was the first woman and first Hispanic United States Attorney for Massachusetts and was responsible for overseeing some of the most high profile criminal trials over the last two decades. She has also shown a deep commitment to advancing women in the legal profession. Both of these women have made substantial contributions to our Commonwealth and I am honored to present this award to them.”

Carmen is currently Counsel at Anderson & Kreiger in Boston where she focuses her practice on internal investigations, white-collar criminal defense, corporate compliance, and civil litigation. From 2009 to 2016, she served as the U.S. Attorney for Massachusetts, and was the first woman and first Hispanic to serve in that position.  During her tenure, she directed the prosecutions of several notable cases, among them James Whitey Bulger and the Boston Marathon bomber Dzhokhar Tsarnaev.   As U.S. Attorney, protecting the civil rights of the residents of Massachusetts was a top priority for Carmen, and she implemented the District’s first Civil Rights Unit aimed at reinvigorating enforcement of federal civil rights laws. She also broadened the Office’s outreach and engagement efforts, meeting regularly with community groups on a variety of issues to promote public safety, community policing and civil rights.

Prior to becoming U.S. Attorney, Carmen honed her litigation skills as both a federal and state prosecutor, as well as a defense attorney, trying over 60 jury cases to verdict.  She was an Assistant U.S. Attorney in the Economic Crimes Unit of the U.S. Attorney’s Office, and also served for eight years as an Assistant District Attorney in Middlesex County, where she supervised the District Court prosecutors, and prosecuted homicides, sexual assaults and robberies.

In addition to practicing law, Carmen has also spoken extensively on how she was able to break barriers, and frequently offers guidance to other women and people of color interested in pursuing or advancing a career in law.

Anderson & Kreiger, Managing Partner Dave Mackey said,  “The firm is so proud of Carmen and all that she has accomplished and grateful to the WBA for recognizing her skills and leadership.”