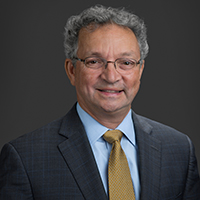 Boston law firm Anderson & Kreiger LLP announces that Lon F. Povich, former Chief Legal Counsel to Massachusetts Governor Charlie Baker and a trusted legal advisor to leaders across the public and private sectors, has joined the firm as Counsel. Widely respected throughout the Commonwealth for his skill in navigating complex legal issues, Mr. Povich brings a wealth of judgment and experience to Anderson & Kreiger.

“Anderson & Kreiger is fortunate to have Lon join our team.  We’ve watched his success in different legal environments throughout his distinguished career,” said David Mackey, Managing Partner at Anderson & Kreiger. “Lon will bring to the firm experience with the wide variety of issues he dealt with in the Baker administration as well as a diverse set of experiences in the private sector and as a federal prosecutor. We know that he will be an excellent colleague and he will further strengthen our ability to serve our clients.”

“As I return to the private practice of law, I wanted to join a firm that offered challenging work in both the public and private sectors as well as an inclusive and supportive culture that prioritizes practicing law with the highest professional standards,” said Mr. Povich. “Anderson & Kreiger fits that bill perfectly and I look forward to sharing my broad set of experiences with the lawyers at the firm and with its clients.”

Povich joins Anderson & Kreiger after serving for more than four years as Chief Legal Counsel to Massachusetts Governor Charlie Baker, where he provided counsel on the wide range of policy and legal matters that came before the Governor and his administration. One key contribution was overseeing the selection and confirmation process for 130 highly qualified and diverse judges, including five justices on the Supreme Judicial Court and 30 percent of the judiciary overall. He worked on a broad set of policy initiatives, including providing counsel on regulating new industries, such as ride-hailing companies like Uber, short-term housing rental companies like Airbnb, and the growing legal marijuana industry. Povich also played key roles in developing significant pieces of legislation, including the broad-scale 2018 criminal justice reform bill and the 2015 reform measures for the Massachusetts Bay Transit Authority (MBTA), and provided advice on the fast-moving legal decisions made in the wake of the catastrophic natural gas explosions in the Merrimack Valley in 2018.

Prior to his time in the Governor’s office, Povich held private sector roles as General Counsel at both Fortune 250 retailer BJ’s Wholesale Club and global strategy consulting firm Boston Consulting Group. He has also served as a federal prosecutor in the United States Attorney’s Office in Boston, where he investigated, tried, and handled the appeal of cases involving complex financial crimes as part of the Economic Crimes Unit. He began his career as a law clerk to Chief Justice Vincent McKusick of the Maine Supreme Judicial Court and as an associate at Goodwin Procter.

Anderson & Kreiger’s attorneys focus their work in the areas of litigation, public law, environmental, real estate, construction, insurance, internal investigation and airports. Our style is open, collegial, practical and efficient. From high stakes litigation and complex transactions to public interest issues, we believe in our clients and our work.